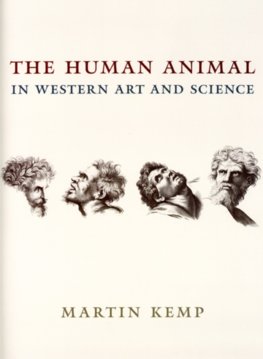 The Human Animal in Western Art and Science

From the lazy, fiddling grasshopper to the sneaky Big Bad Wolf, children's stories and fables enchant us with their portrayals of animals who act like people. But the comparisons run both ways, as metaphors, stories, and images - as well as scientific theories - throughout history remind us that humans often act like animals, and that the line separating them is not as clear as we'd like to pretend. Here, Martin Kemp explores a stunning range of images and ideas to demonstrate just how deeply these underappreciated links between humans and other fauna are embedded in our culture.

Tracing those interconnections among art, science, and literature, Kemp leads us on a dazzling tour of Western thought, from Aristotelian physiognomy and its influence on phrenology to the Great Chain of Being and Darwinian evolution. We learn about the racist anthropology underlying a familiar Degas sculpture, see paintings of a remarkably simian Judas, and watch Mowgli, the man-child from Kipling's "The Jungle Book", exhibit the behaviors of the beasts who raised him. Like a kaleidoscope, Kemp uses these stories to refract, reconfigure, and echo the essential truth that the way we think about animals inevitably inflects how we think about people, and vice versa.

Loaded with vivid illustrations and drawing on sources from Hesiod to La Fontaine, Leonardo to P. T. Barnum, "The Human Animal in Western Art and Science" is a fascinating, eye-opening reminder of our deep affinities with our fellow members of the animal kingdom.

The Story of Contemporary Art