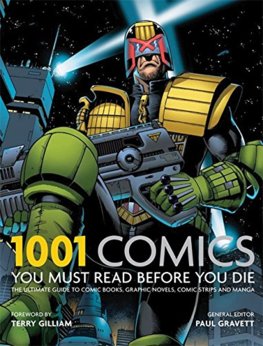 Over the centuries, comic books and their offshoots, such as graphic novels, and bandes dessinées have evolved into a phenomenally popular, influential, and unique art form with which we can express our opinions, our fantasies, our nightmares, and our dreams. In short: comics are emphatically no longer just for kids. This diverse, constantly evolving medium is truly coming into its own in the 21st century, from Hollywood's blockbuster adaptations of super-powered caped crusaders to the global spread of Japan's manga and its spinoffs, and from award-winning graphic novels such as Maus and Persepolis to new forms such as online webcomix. But comics also have a long and rich history, dating back at least to the Swiss teacher Rodolphe Töpffer in the early 19th century, and far earlier in China.1001 Comic Books You Must Read Before You Die is the perfect introduction to this dynamic and globally popular medium. There have been other guides to the best comic books, but none has embraced every genre and scoured the globe to glean the very greatest works of sequential art, graphic literature, bandes dessinées, tebeos, fumetti, manga, manhwa, komiks, strips, historietas, quadrinhos, beeldverhalen, and plain old comics.This authoritative guide is organized according to the year of first publication in the country of origin. An opening section acknowledges pioneering pre-1900 masterpieces, followed by sections divided by decade, creating a fascinating year-by-year chronicle of the comics medium worldwide.

The Golden Age of DC Comics

The Librarian of Auschwitz: The Graphic Novel