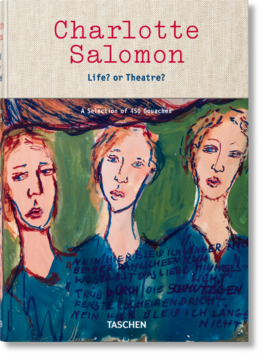 When German artist Charlotte Salomon (1917–1943) handed her gouache series Life? or Theater? over to a friend, she beseeched him to “take good care of it, it is my entire life.” A few months later, the five-months pregnant Charlotte was picked up by a Gestapo truck, deported to Drancy, and then on to Auschwitz, where she died upon arrival at the age 26.

The work Salomon left behind is, in a very real sense, her pièce de résistance – in her own words, “something wildly eccentric.” A cycle of nearly 1,300 autobiographical gouaches, it combines creative force with pioneering personal narrative into one shattering document of self-expression.

Divided into three sections, the gouaches unveil a vivid self-portrait spanning across all facets of Charlotte's existence: from a complicated family life, marked by the suicides of nearly all female relatives; growing up in Berlin; her close relation to singing teacher Alfred Wolfsohn; the rise of the Nazis; to her exile to France in 1939. Throughout, the artist challenges these destructive forces by deploying playful pseudonyms and fantastical elements alongside emotional candor, remarkable observation, and a meticulous visual memory. Her film strip-like sequences are interspersed not only with words but also musical suggestions, making Life? or Theater? the storybook for a whole musical, years before the heyday of that genre.

Without comparison, the gouaches are a triumph of personal truth and individual expression. Published here with a selection of the 450 most important pieces, Life? Or Theatre? is an unrivaled opus magnum from a great and ambitious artist, dark with her early death, but luminous with her precision, her lyricism, and her courage.