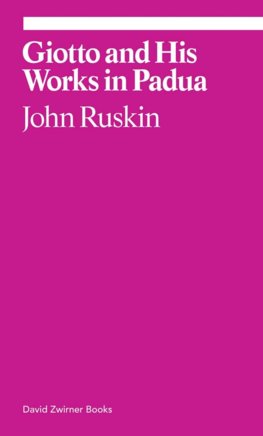 Giotto and His Works in Pauda

In 1303, Giotto, then considered the preeminent painter in Italy, was commissioned to paint the Arena Chapel in Padua. The resulting Chapel and its panels, detailing the history, birth, life and death of Christ, rank among the greatest artworks ever created.

John Ruskin (1819-1900) redefined art criticism in the 19th century through his attention to detail, his playful and engaging prose and the conviction with which he discussed the subjects that mattered most to him. Here Ruskin examines Giotto's panels and brings them to life, describing their many hidden details, all the result of Giotto's unrivaled genius.

The Arundel Society first published "Giotto and His Works in Padua" between 1853 and 1860. Long out of print, it stands as Ruskin's most compelling set of reflections on Giotto's masterpiece--an artwork that, in Ruskin's estimation, changed the very course of art history. Originally accompanied by a set of black-and-white woodcuts of the panels in the Chapel, this new edition presents each panel in vivid color photography, adding a useful visual aid to Ruskin's lyrical descriptions. The result is a book that serves not only as an introduction for students of art history, but also as a discussion of what it means to be a great artist, by one of the most influential writers ever to tackle visual art.

The King of the Golden River

Paint with the Watercolour Masters