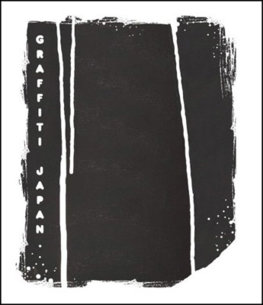 Japan has long been a breeding ground for innovative approaches to Western traditions, like movies and baseball. But, the fanatical embrace with which Japanese artists have welcomed graffiti has made for a form of graffiti wholly apart from its Western origins. Photographed by Remo Camerota, Graffiti Japan captures the culturally unique aspects of Japanese street art, providing the most complete look at Japan’s contemporary graffiti scene ever compiled.

Camerota could never have guessed that his first, on-a-whim trip to Japan would result in him moving to Tokyo and befriending the scene’s most prolific and talented artists. The more time he spent with them traveling from city to city, meeting local luminaries, the more photographs he took, the more excited the artists became about helping Camerota delve deeper and deeper.

Interviews with KRESS, BELX2, FATE, TENGA, EMAR, SUIKO, QP and many more reveal how these artists define their work as specifically Japanese, musing on everything from replicating the calligraphic intricacies of the Japanese language with spray paint, to foreign influences and national pride. Every single photograph in Graffiti Japan was shot in Japan, featuring anime and manga characters, kanji, sprawling legal murals and illegal hidden spots, all of which comprise this spectacular scene that could not exist in any other country.