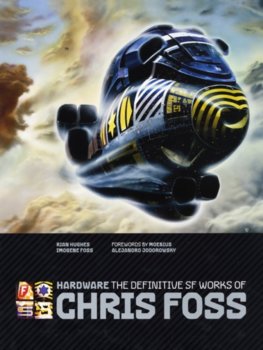 E. Van Vogt and Philip K. Dick, and film design for Ridley Scott and Stanley Kubrick, this volume brings together many rare and classic images that have never been seen or reprinted before.

The first comprehensive retrospective of Chris Foss' sf career. Chris Foss' name has become pre-eminent among sf artists...He is in love with the monstrous, with angular momentum, with inertia-free projectiles and irresistable objects. A" - Brian Aldiss [Foss'] creations are real machines, not just an artist's dreams.

They combine the two elements so essential to science fiction: realism and a sense of wonder...A medieval goldsmith of future eons.A" - Alejandro Jodorowsky. Rian Hughes is an award-winning graphic designer, illustrator, font designer and comics artist, noted for his work on 2000AD, and Dan Dare. His illustration work is highly distinctive, wearing its design influences on its sleeve.

Clients include Virgin Airways, Penguin Books, DC Comics (for whom he has designed numerous logos), Eurostar the BBC and a range of magazines and newspapers. He is the editor and designer of several books including "Lifestyle Illustration of the 60s" and the recently released "Cult-ure". "One of the most successful and prolific designer/illustrators of the past 20 years" - Roger Sabin, Eye magazine