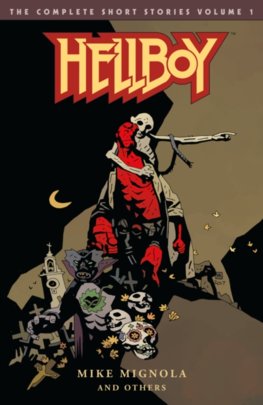 The ultimate introduction to this supernatural hero features 16 standalone stories with Mignola's greatest collaborators--stories that can be read in any order. This 368-page volume covers Hellboy's adventures from 1947 to 1961, reprinting stories from The Chained Coffin, The Right Hand of Doom, The Bride of Hell, The Crooked Man, The Troll Witch, and Hellboy's childhood adventure, The Midnight Circus, drawn by Duncan Fegredo, artist of The Wild Hunt, the basis for Neil Marshall's film Hellboy: The Rise of the Blood Queen. In 1994 Mike Mignola released the first Hellboy series, Seed of Destruction, as Hellboy faced his supposed destiny as Beast of the Apocalypse. Before that, he'd spent fifty years fighting monsters as a somewhat carefree member of the Bureau for Paranormal Research and Defense. The Complete Short Stories Volumes 1 & 2 present those early adventures. "The Crooked Man" and "Double Feature of Evil," both of which earned Mignola and his legendary collaborator Richard Corben Eisner Awards, are collected with the complete "Hellboy in Mexico" saga, featuring collaborations with Corben, Mick McMahon, Gabriel Ba, and Fabio Moon, as well as one of Mignola's early masterpiece, "The Corpse." The two volumes of The Complete Short Stories together with the four volume Hellboy Omnibus series collect all of Mignola's award-winning Hellboy stories in chronological order for a definitive reading experience.

Visitor How and Why He Stayed