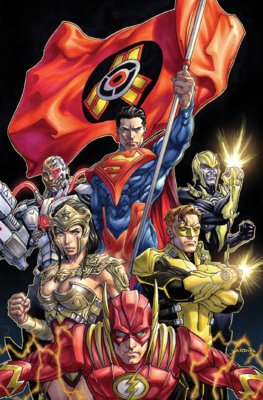 Injustice Gods Among Us Year Five 3

The epic prequel graphic novel series to the hit video game INJUSTICE: GODS AMONG US comes to its shocking conclusion here!

The reign of Superman is over.

Or so it seems to Batman and Hawkman. The Man of Steel's most implacable enemy, the Dark Knight, has teamed up with the warlord of Thanagar to bring Kryptonite-powered destruction to Superman's regime and all of its work.

But it will take more than brute force to take down the totalitarian regime of the Man of Tomorrow. As the Caped Crusader's ally Batgirl hacks into Cyborg's database to broadcast proof of Superman's brutality to the world, a dimensional vortex is breached, proving that a reality in which the world's greatest heroes work together is indeed possible. Meanwhile, lethal adversaries like Lex Luthor, Deathstroke and Raven put their
own plans into play. Will Superman's new world order crumble around him? Or will he live to rule another day?

Hundred: What You Learn in a Lifetime