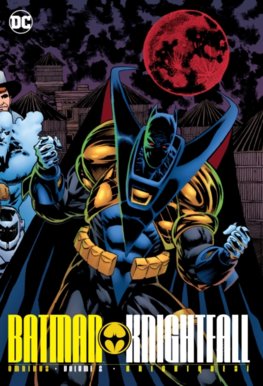 A new Batman's deadly crusade against the criminals of Gotham City begins! Bruce Wayne, battle-broken and out of commission after his epic showdown with Gotham's famous villain Bane, has appointed a new Dark Knight to keep the bad guys at bay. Jean-Paul Valley (a.k.a. Azrael) has assumed the role of the caped crusader, but without Bruce's integrity as a calming influence, Jean-Paul is swiftly getting out of hand, alienating both Robin and Commissioner Gordon.

Meanwhile, the hulking baddie Bane is still on the loose, while new villainous foes are introduced onto the battlefield that is Gotham, including master marksman Mekros and sinister sniper Gunhawk. Also, watch out for the return of familiar faces such as the serial killer Abattoir and, of course, the eerily jovial Joker. Can the new Dark Knight face these nefarious challenges without Bruce Wayne and Robin? Might his violent manner of crime-fighting permanently cripple the already beleaguered Gotham? BATMAN: KNIGHTFALL OMNIBUS VOLUME 2: KNIGHTQUEST includes the best-selling story lines "The Crusade" and "The Search" from BATMAN #501-508, BATMAN LEGENDS OF THE DARK KNIGHT #59-61, BATMAN: SHADOW OF THE BAT #19-27, CATWOMAN #6-7 DETECTIVE COMICS #667-675, JUSTICE LEAGUE TASK FORCE #5-6, ROBIN #1-2 and 7, and SHOWCASE '94 #7.

Deadpool And The Secret Defenders

Welcome to the Ballroom 2