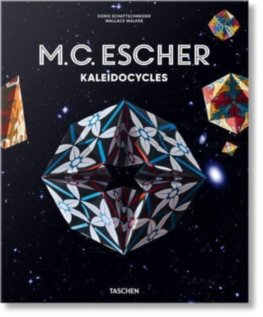 Illusions in Your Hands

Mysterious and mathematical at once, the magical visual world of Dutch artist M.C. Escher (1898–1972) has captivated scientists and scholars and made its mark on popular culture, inspiring book covers, album art, films, posters, and puzzles.

This set puts Escher’s tessellated wonders right at your fingertips with 17 easy-to-assemble paper sculptures. Folding along the score lines, you can transform the artist’s richly geometric designs into three-dimensional polyhedra with forming and reforming patterns, including genius arrangements of flowers, butterflies, lizards, and seashells. The book includes a review of the geometric principles and artistic invention underlying Escher’s optical marvels as well as concise instructions.

Wallace G. Walker spent most of his career as an independent artist residing in New York City. He was a graduate of Cranbrook Academy of Art, Bloomfield Hills, Michigan and the inventor of IsoAxis®. He worked for I.M. Pei and Partners and taught at both Parsons School of Design and the New York Institute of Technology. He had numerous shows and exhibits in cities across the USA. He returned to his hometown of Shreveport, Louisiana in 1989 and continued his artistic activities until his death in 2003.

Doris Schattschneider is Professor Emerita of Mathematics at Moravian College in Bethlehem, Pennsylvania, where she taught for 34 years. Her dual interest in geometry and art led naturally to the study of M.C. Escher’s work. Active as a teacher, lecturer, editor, and writer, she has published widely on Escher’s work. Her book M.C. Escher: Visions of Symmetry gives a complete account of Escher’s symmetry work, and includes color photographs of all 150 of Escher’s symmetry drawings.