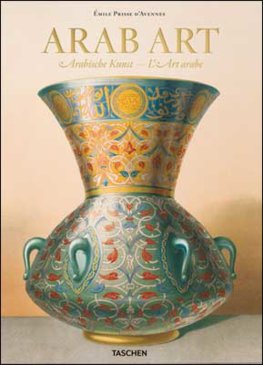 Emile Prisse d'Avennes (1807–1879), a French Orientalist, author and artist, was one of the greatest pre-20th century Egyptologists. An ardent admirer of the superb skills of Egyptian and Oriental artisans, he was enamored of Arabic art. As a youth he dreamed of exploring the Orient, and at 19 began travelling to Greece and Palestine. Over the next 40 years he explored Syria, Arabia, Persia, and resided in Egypt and Algeria. Converting to Islam, he travelled Egypt disguised as an Arab, using the name Edris Effendi. A student of ancient Egyptian and Islamic cultures, he later wrote: "We shall discuss all the arts, all the industries cultivated by Orientals with so much taste, brilliance, and fantasy. We will present splendid reproductions of the monuments, objects of art and luxury, which provide evidence of an advanced civilization, the influence of which has been felt even in Europe."

In 1848/1851 Prisse d'Avennes published his Oriental Album in London (Oriental Album. Characters, Costumes, and Modes of Life, the Valley of the Nile). This brilliant collection of 32 chromolithographs illustrating the people and costumes of the Nile Valley was accompanied by a commentary by renowned Orientalist and Egyptologist James Augustus St. John. After again travelling to North Africa, Prisse d'Avennes returned to France in 1860, bearing the fruits of his journeys—hundreds of folio drawings, photographs, sketches, plans and 400 meters of bas-reliefs. Fascinated by the symmetry, complexity, and opulence of Egyptian and Arabic art, he drew from this vast collection to create compilations of the finest examples of art and architecture, which also took into account historical, social, and religious contexts. In 1877, he published his outstanding survey on Islamic art and architecture, Arab Art (L'Art arabe d'après les monuments du Kaire, 1869–1877), in Paris. This publication reproduces the three atlas volumes containing 200 plates—137 of them magnificent chromolithographs—mainly by Prisse d'Avennes. L’Art arabe is an indispensable compendium on the development of Arabic art, portraying its splendor and diversity, and a work of supreme draftsmanship.

Fra Angelico and the Rise of the Florentine Renaissance

Rembrandt and the Dutch golden age

The Art of Contemporary China