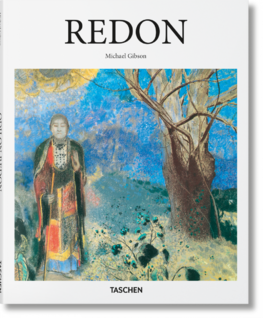 A major Symbolist artist, Odilon Redon (1840–1916) was also a painter of scenic and emotional extremes. Until around 1890, he was renowned for work in black and white only. These “Noirs” in charcoal drawing or lithograph were composed not only of a sombre palette, but also by fantastic, frightening figures. Gradually, the artist began to introduce colored pastel, and with it, new and lighter motifs. Flowers became a recurring preoccupation. Where symbols of melancholy once stood, horses and fluttering butterflies entered the scene.

While this latter-day lyricism and harmony contrasted sharply with Redon’s earlier mood of melancholy, his guiding principle remained to “place the visible at the service of the invisible”. With his dream-like imagery, sumptuous textures, and suggestive use of color, Redon sought to create a pictorial equivalent to his own psyche. From foreboding to lightness, he was above all an artist of states of mind, with considerable influence on later Post-Impressionism.