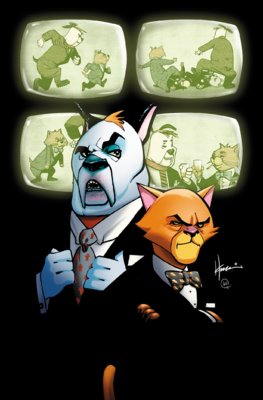 Ruff, a shrewd cat, and Reddy, a lovable but dim-witted dog, used to run the world as the team starring in the RUFF AND REDDY SHOW. But when their animated series comes to an end, so does their fame and partnership.

THE RUFF AND REDDY SHOW catches up with Ruff and Reddy, both on their own and down and out. When an entrepreneurial talent agent convinces the duo that the world is waiting on their career revival, they set out in pursuit of landing their second big break. Ruff and Reddy then appear in a slew of TV pilots, from crime dramas to sitcoms to game shows to reality TV, hoping to regain their spots at the top of the world. With sharp wit, biting humor, and a heavy dose of nostalgia, Howard Chaykin (AMERICAN FLAGG, BLACK KISS) turns a beloved classic cartoon into a modern graphic novel masterpiece with THE RUFF AND REDDY SHOW, which collects the six-issue miniseries.

Hanna-Barbera has created some of the most recognizable animated characters of all time. As part of DC Comics' reimagining of cartoons like THE RUFF AND REDDY SHOW, SCOOBY-DOO, THE FLINTSONES, JOHNNY QUEST, SPACE GHOST, and WACKY RACERS, these new series are infused with modern and contemporary concepts while keeping the heart and soul of the classic animated series.

Batman Death of the Family Book and Joker Mask Set