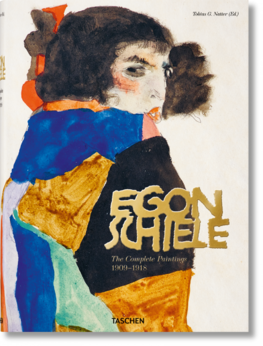 Over the course of his short life, Austrian artist Egon Schiele (1890–1918) blazed a turbulent Expressionist trail. A child prodigy, young rebel, and chronic provocateur, he caused uproar among the establishment with his contorted lines, distorted bodies, and explicit eroticism and continues to startle to this day with his unflinching images of himself and his nude subjects.

In this expansive XXL-format book, we survey the complete catalogue of Schiele paintings from his most innovative and prolific decade between 1909 and 1918. The 221 featured works reveal how the artist reveled in stylistic freedom and shock, abandoning classical figuration for a distorted and exaggerated physicality that rendered emotional and sexual truth. His subjects are elongated, angular, and twisted. With protruding ribs, contorted limbs, and sickly skin, the body becomes a locus of anguish. The only reprieve is the promise of sex. Like no other early 20th-century artist, Schiele laid genitalia bare, bringing some of the most candid renderings of the vagina in Western art history, as well as scenes of masturbation and lesbian sex.

These startling works are presented alongside biographical details, expert insights, as well as Schiele’s own writings and poems, offering intimate access to the ideas behind his work and his extraordinary legacy through countless 20th-century masters, from Francis Bacon and Otto Muehl to Julian Schnabel, David Bowie, and Tracey Emin.

The Self-Portrait, from Schiele to Beckmann