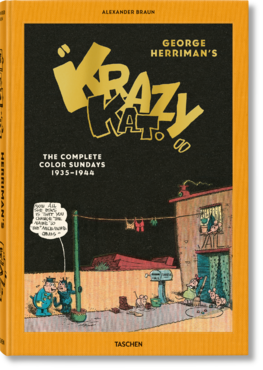 Alexander Braun
165,00 €
Momentálne nedostupné
A color facsimile of the complete pages of George Herriman’s Krazy Kat1935–44. One of the first comics to be considered a work of art, Krazy Katdelights with its detailed characterization and visual-verbal creativity alongside the slapstick shenanigans between Krazy and Ignatz the mouse. This volume comes with a100-page illustrated introduction by Alexander Braun.

It was thanks to media tycoon William Randolph Hearst, a confirmed fan who gave Herriman carte blanchein his newspapers, that the artist was allowed to freely explore countless absurd and melancholy variations on the theme of unrequited love for years on end. Herriman unabashedly took advantage of this, radically exploring the medium’s potential and pushing all of its formal boundaries; readers had to put up with surreal, Dadaist sceneries, a language that whirled slang, neologisms, phonetic spelling, and scholarly references, and diffuse gender roles—making Krazy Kat probablythe first gender-fluid star in comic history.

This volume presents all Krazy Katcolor stories from 1935–1944and a detailed introductionby comic expert Alexander Braun, who illuminates Herriman’s multi-ethnic background and reveals what makes this timeless work of art about a queer cat so extraordinary.

Visual artist Alexander Braun(born 1966) has received numerous accolades and scholarships, and his work has appeared in several exhibitions. Alongside his independent artistic activities, he studied art history in Bochum and Berlin (his 1998 doctorate thesis was on the work of the American installation artist Robert Gober). Over the past two decades, Braun has compiled one of the most extensive collections on the history of comics. Since 2008, he has curated several museum exhibits on this topic, including a comprehensive retrospective on the work of Winsor McCay in 2012/2013. In 2011, he founded the German Academy of Comic Art.

Daredevil Back in Black Vol. 1: Chinatown