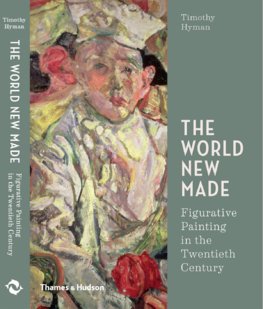 Figurative painting is due a reappraisal. From the early 1950s to the early 1980s, modern art and abstraction were almost synonymous, with figurative painters cast as 'backward children', conservative throwbacks and outdated survivors. In The World New Made , Timothy Hyman argues that figuration never went away; abstraction was just one of the ways by which artists renewed pictorial language. The World New Made is structured not as a general survey, but as an in-depth exploration of over 130 specific paintings, and accompanying artists' writings. Focusing on those painters who took a contrary path, he presents a case for these artists as a resistance of sorts. Starting with the oppressive stylistic imperative that set in as Cubism became a movement, he guides us through the Neue Sachlichkeit response to Expressionism, Intimism, 'outsiders' and the aftermath of Abstract Expressionism, towards a new kind of history painting. He shows how abstraction becomes a midwife to a new kind of figuration, with Matisse, Picasso, Rousseau, Bacon, Edward Burra, Anselm Kiefer, Jack Yeats, Paula Rego, Lucian Freud, Red Grooms, Neo Rauch, Howard Hodgkin and others, all staking out their separate territories. A celebration of the richness of human-centred painting over the last century, Timothy Hyman's lavishly illustrated new book - distilled from many decades of looking and writing - brings these often-marginalized artists centre stage. Together they offer a counter-argument to Western formalism, and a foundation for the figurative painters of the 21st century.

The Lives of the Surrealists

50 Women Artists You Should Know