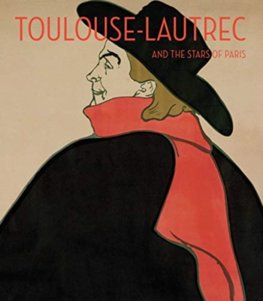 Toulouse-Lautrec and the Stars of Paris

The stars and denizens of Toulouse-Lautrec's bohemian cabaret world
Toulouse-Lautrec and the Stars of Paris offers a guided tour of fin-de-siècle Paris at night, bringing a group of its legendary protagonists to life.
The six performers at the center of this book--Yvette Guilbert, Jane Avril, Aristide Bruant, Marcelle Lender, May Belfort and Loïe Fuller--were all depicted by Henri de Toulouse-Lautrec, and in some ways defined by his iconic renderings. Actors and actresses, comedians, cabaret singers and dancers, these figures were the stars of the new entertainments of 19th-century Paris.
This booming nightlife scene coincided with new developments in modern printmaking. Lautrec immortalized the performances and personas of the city's entertainers in colorful lithographs, elevating the advertising poster to the status of high art. Artist and performer collaborated to exploit a new culture of entertainment and mass media, creating a new kind of celebrity in the process.
Lavishly illustrated with high-quality, full-color reproductions of Lautrec's iconic images alongside some of his rarely seen sketches, and illuminated by insightful essays, this volume shines a spotlight on the stars of the Paris stage, the birth of modern celebrity culture and the brilliance of the artist who gave them enduring life.
Henri de Toulouse-Lautrec (1864-1901) was the descendant of an old and distinguished aristocratic family from the south of France, but he found his true home in the bars and nightclubs of the Montmartre distinct in Paris. In a brief mature career of only 15 years (Lautrec died at age 36 from complications of alcoholism and syphilis), the artist was stunningly prolific, producing approximately 1,000 paintings and watercolors, nearly 5,000 drawings and more than 350 prints and posters.

25 Monet, The Triumph of Impressionism

Banksy. You Are An Acceptable Level of Threat