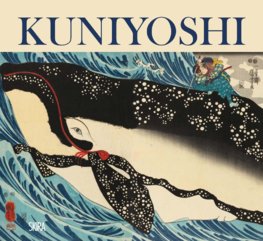 Recognized as one of the most interesting and vibrant artists from the Edo period, Utagawa Kuniyoshi (1797–1861) is a major exponent of ukiyo-e in the early 1800s and trained under the master Utagawa Toyokuni. His fame is tied to the series of polychrome xylographs that illustrate the 108 heroes from the novel Suikoden (Brigands) , which became a bestseller in China and Japan in the late 1700s, promoting the imagery of a band of brigands who defend the people suppressed by injustice and government corruption. Violent, powerful, armed people with muscular bodies covered in tattoos that today inspire manga , anime , tattoo artists and illustrators across the world. Kuniyoshi affirmed the genre of warrior prints, but he was also interested in portraits of female beauties, kabuki actors, landscapes, children and ghosts, another greatly admired genre in Japan. Nonetheless, his name is above all associated with illusion, with shadows and Arcimboldo-like composite figures, figures within figures and parodies of stories and battles with animals, objects, sweets, food. His images are fantastical, baroque, rich in colour, of great detail, with imposing characters and dynamic actions. A versatile and intriguing figure for the variety of subjects, from female beauties and monsters to animals and heroes, and for the impressive technique that gave life to a school carried forth for generations.