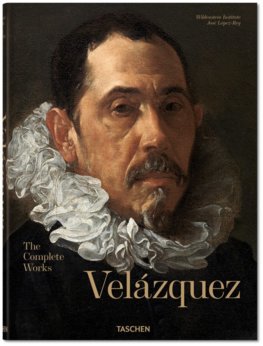 José López-Rey, Odile Delenda, Wildenstein Institute
135,00 €
Na objednávku
Manet called him “the greatest painter of all.” Picasso was so inspired by his masterpiece Las Meninas that he painted 44 variations of it. Francis Bacon painted a study of his portrait of Pope Innocent X. Monet and Renoir, Corot and Courbet, Degas and Dalí…for so many champions of art history, the ultimate soundboard was—and remains—Diego Rodríguez de Silva y Velázquez(1599-1660).

This updated catalog raisonné brings together Velázquez’s complete works, jaw-droppingly reproduced in extra-large format, with a selection of enlarged details and brand new photography of recently restored paintings,achieved through the joint initiative of TASCHEN and Wildenstein. The book's dazzling images are accompanied by insightful commentary from José López-Reyon Velázquez's interest in human life and his equal attention to all subjects, from an old woman frying eggs to a pope or king, as well as his commitment to color and light, which would influence the Impressionists over two centuries later.
The authors:
José López-Rey (1905–1991) taught Italian Renaissance at the University of Madrid and worked as an art advisor for the Spanish Ministry of Education. Before the end of the Spanish Civil War, he emigrated to the USA, where he resumed his teaching career at the Institute of Fine Arts, New York. In 1973 he was awarded emeritus status. López-Rey was a corresponding member of the Hispanic Society of America and a consultant and contributor to several international art journals, including the Gazette des Beaux Arts and Art News.

Odile Delenda, graduate of the École du Louvre, served as professor there, and then as deputy head of the department of paintings at the Musée du Louvre until 2007. She has collaborated on several exhibitions of old master paintings. A research fellow at the Wildenstein Institute in Paris since 1990, she has continued her study of Spanish art from the Siglo de Oro. She is, among other works, the author of Vélasquez, peintre religieux (1993) and, under the auspices of the Wildenstein Institute, the first critical catalogue raisonné of the painted oeuvre of Francisco de Zurbarán and his studio (2009/10).