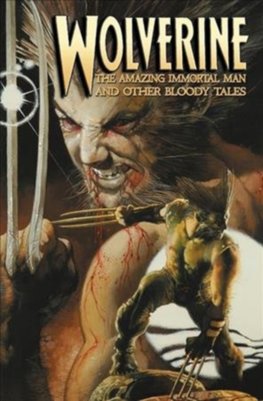 Wolverine The Amazing Immortal Man and Other Bloody Tales

Wolverine unleashed in savage stories that span his century-long life! From terrifying the crowds in a 1930s freak show, to battling Nazi werewolves in WWII, to fighting pirates in Korea, mobsters in New Jersey and a mythical creature in the American Southwest, Logan's long life has taken him to every corner of the globe - and beyond! Now, in rarely-seen tales by an army of top talent, watch Wolverine take on ninjas, monsters, zombies, Morlocks and more ! Plus grudge matches with Mojo, Mr. X and the Wendigo! It's Wolverine as you like him best! COLLECTING: WOLVERINE 900, 1000; WOLVERINE ANNUAL (2007) 2; RAMPAGING WOLVERINE 1; WOLVERINE: THE AMAZING IMMORTAL MAN & OTHER BLOODY TALES, UNDER THE BOARDWALK, WENDIGO!, CARNIBRAWL, SAVAGE, MR. X, DUST FROM ABOVE, DEBT OF DEATH; MATERIAL FROM WOLVERINE: SWITCHBACK

In: The Graphic Novel

How to Pick a Fight

Legends of the Dark Knight