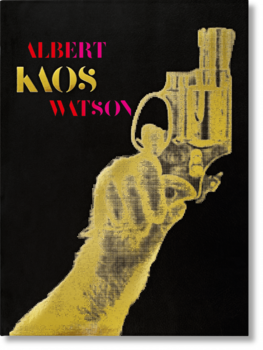 What makes Albert Watson one of the world’s most revered photographers, hailed by peers, critics, and collectors alike? Is it his unparalleled portfolio of celebrity portraits? Breathtaking landscapes? Sensual nudes, still lifes, illustrious fashion shoots?

KAOS presents a kaleidoscopic overview of Watson’s career to date and the dazzling array of subjects, objects, people, and places he has encountered along the way. A skillfully curated survey of a uniquely diverse, dynamic portfolio, it spans nearly half a century of photography to encounter stars, statesmen, women, and strangers; bound through neon-blazing cities; find figures poised, gymnastic, or shimmering with nude eroticism; roam the bright lights and the backstreets; soak up extravagant sunsets; enter the controlled studio environment; and breathe in the elemental wilds of the photographer’s native Scotland.

This remarkable collection is accompanied by an essay from the recently retired head of photographs at Christie’s, Philippe Garner, and extensive quotes from Watson, as well as dozens of previously unpublished Polaroids, culled from Watson’s personal archives. The result is a defining document of the “photographer’s photographer,” iridescent in its graphic, often cinematic allure, and irresistible in its eclectic glory.

Also available as four signed Art Editions (No. 1–200), all with a signed print.