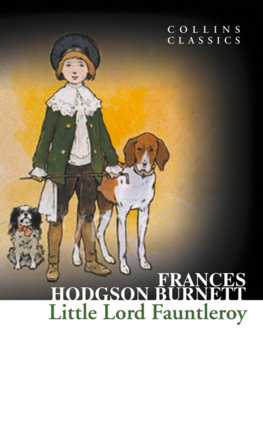 ‘Lord Dorincourt had occasion to wear his grim smile many a time as the days passed by. Indeed, as his acquaintance with his grandson progressed, he wore the smile so often that there were moments when it almost lost its grimness.’

When young Cedric Errol's father dies, he becomes heir to the fortune of his English grandfather, the Earl of Dorincourt, and must move from working-class New York to England. Bad-tempered, cantankerous and bitter, the old man is slowly won over by the kind, generous and cheerful spirit of Cedric.

When a plot arises to deprive Cedric of his inheritance and another pretender steps forward as heir, Cedric's friends in America become involved in order to thwart the challenger. Through Cedric's unconditional love and trust he teaches his grandfather to show compassion to those who are less fortunate than himself.

Burnett's book had a huge impact on 19th century society, influencing how young middle- class American boys dressed through her detailed descriptions of Cedric's lordly clothing. The book even set new precedents in copyright law when Burnett won the rights to theatrical adaptations of the work.

Tess Of The D’Urbervilles