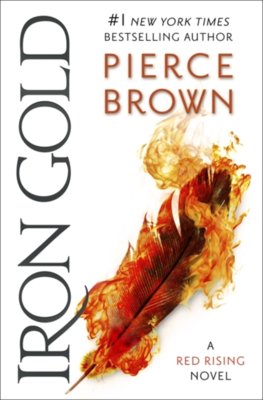 He ended centuries of Gold rule, broke the chains of an empire, and now he's the hero of a brave new republic. But at terrible cost. At the edge of the solar system, the grandson of the emperor he murdered dreams of revenge.

In his hidden fortress in the oceans of Venus, the Ash Lord lies in wait, plotting to crush the newborn democracy. And, at home, a young Red girl who's lost everything to the Rising questions whether freedom was just another Gold lie. In a fearsome new world where Obsidian pirates roam the Belt, famine and genocide ravage Mars, and crime lords terrorise Luna, it's time for Darrow and a cast of new characters from across the solar system to face down the chaos that revolution has unleashed.

This is one you absolutely will have to read' - The BiblioSanctum '[Iron Gold] offers us both a continuation of the story Brown has been telling for years right alongside an eye-opening widening of his universe, as though we're watching it all through an exquisitely calibrated telescope that can slide on perfect bearings from one side of the solar system to the other without the slightest blur . . .

Mature science fiction existing within the frame of blazing space opera' - NPR Books 'The books are an exhilarating fusion of The Hunger Games, Blade Runner and Dune. Amid a pulse-pounding narrative, they fearlessly tackle major issues like the fragility of democracy and the fallibility of human nature to betray its ideals even when freedom is attained' - Express '[A] thoughtful blend of action, intrigue, and prosaic human drama' - Publishers Weekly 'Iron Gold offers more of everything we loved about the first three books. Pierce Brown builds upon the foundations of the incredible universe and story he spun in the first trilogy, pivoting on his characters' flaws and fallibility to steer the narrative in unexpected directions.

Suffice it to say, readers will be soon be dying to read the next one' - Barnes & Noble 'This book lives up to every expectation I have for Pierce Brown . . .

you MUST read this, it will not disappoint!' - The Speculative Herald'Brown succeeds not only in writing a great book, but adding to the world and Red Rising's mythos . . .

The mix of political intrigue, action and thematic journeys elevate this book from a simple sci-fi adventure into something more thought-provoking and rewarding. Fans of Brown and his series should really enjoy this latest addition to Red Rising' - FlickeringMyth.com

Television Was a Baby Crawling Toward That Deathchamber

A Song for the Dark Times