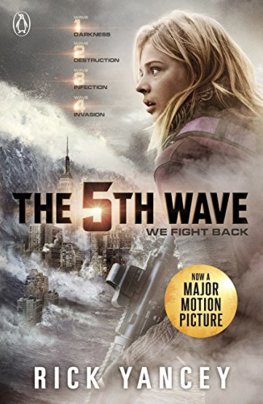 THE 1st WAVE: Took out half a million people.
THE 2nd WAVE: Put that number to shame.
THE 3rd WAVE: Lasted a little longer. Twelve weeks . . . Four billion dead.
IN THE 4th WAVE, You can't trust that people are still people.
AND THE 5th WAVE? No one knows. But it's coming.

On a lonely stretch of highway, Cassie runs.
Runs from the beings that only look human, who have scattered Earth's last survivors.
To stay alone is to stay alive, until she meets Evan Walker. Beguiling and mysterious, Evan may be her only hope.

Now Cassie must choose: between trust and despair, between defiance and surrender, between life and death. To give up or to get up.

'A modern sci-fi masterpiece . . . Should do for aliens what Twilight did for vampires.' USA Today

'The pace is relentless' Heat

'This is DAMN and WOW territory . . . One of the best books I've read in years.' Melissa
Marr, New York Times bestselling author.

'An epic sci-fi adventure about a terrifying alien invasion. You'll read it in one sitting' Bookseller

'Borrow this one from your teen's nightstand while they're at school.' People Magazine

Fantastic Beasts and Where to Find Them Deluxe Illustrated Edition

The Girl the Sea Gave Back

The Dark Prophecy The Trials of Apollo Book 2