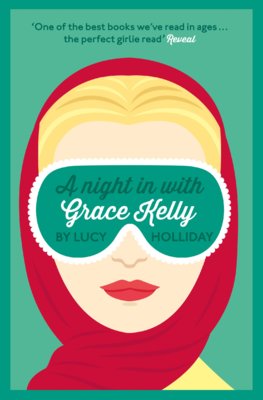 A Night In With Grace Kelly

The LOL conclusion to the series that started with A Night in With Audrey Hepburn. Perfect for fans of Sophie Kinsella and Lindsey Kelk.

Fate has got it in for Libby Lomax. She realised, far too late, that her best friend Olly, is the actual Love of Her Life. Now he’s in love with the so-nice-it-hurts, Tash, and it looks like her happy ending is completely out of reach.

Things start looking up when she, quite literally, runs into the completely gorgeous Joel. Libby discovers that there is more to Joel than his six-pack, not least, the incredible fact that he honestly believes he has found his fairy tale princess in her.

And if this wasn’t enough, an unwanted guest shows up on Libby’s enchanted sofa; Grace Kelly, wearing her iconic wedding dress and convinced that Libby is figment of her imagination. But one thing that Grace doesn’t believe in is fairy tales. Grace believes that if you really want something, then you’ve got to make it happen yourself; words which give Libby hope that happy endings aren’t just for fairy tale princesses…

Night In With Audrey Hepburn

All That Remains : A Life in Death

Pythons Autobiography By The Pythons