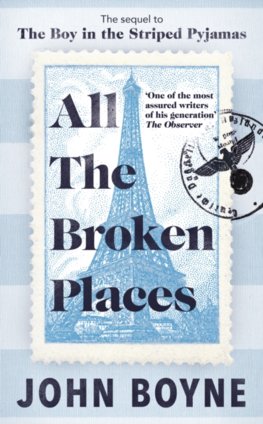 All The Broken Places

1946. Three years after a cataclysmic event which tore their lives apart, a mother and daughter flee Poland for Paris, shame, and fear at their heels, not knowing how hard it is to escape your past.

Nearly eighty years later, Gretel Fernsby lives a life that is a far cry from her childhood. When a couple moves into the flat below her in her London mansion block, it should be nothing more than a momentary inconvenience.

However, the appearance of their nine-year-old son Henry brings back memories she would rather forget.

Faced with a choice between her own safety and his, Gretel is taken back to a similar crossroads she encountered long ago. Back then, her complicity dishonoured her life, but to interfere now could risk revealing the secrets she has spent a lifetime protecting.

All the Broken Places is John Boyne's masterful sequel to his classic bestseller, The Boy in the Striped Pyjamas, taking a character from that novel on a journey to a place she never goes - the past. Through her story, he explores the aftermath of the war and the effects of a lifetime of guilt.

Boy at the Top of the Mountain

Get A Life, Chloe Brown

Rather Be the Devil