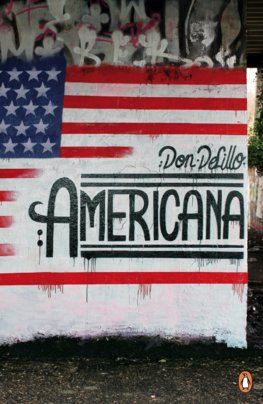 ' "My life," I said, "is a series of telephone messages which nobody understands but me" '

David Bell embodies the American dream. He's twenty-eight, has survived office coups, scandals, and beaten lesser rivals, to become an extremely successful TV exec. The images that flicker across America's screens, the fantasies that enthrall viewers, they are of his making. But David's dream is turning sour, nightmarish. He wants reality, to touch, feel and record what is real. He takes a camera and journeys across America in a mad, roving quest to discover and capture some sense of his own and his country's past, present and future.

Don DeLillo was born and raised in New York City. He has written fifteen novels and three stage plays and has won many honours including the National Book Award for White Noise, the International Fiction Prize for Libra, the PEN/Faulkner Award for Fiction for Mao II, the Jerusalem Prize, the Howells Medal for Underworld and the PEN/Saul Bellow Award for Achievement in American Fiction.

The PENGUIN STREET ART series marries timeless writing with enduring design. Some of the world's leading street artists have designed new covers especially for ten classic contemporary books from Penguin: Hawksmoor by Peter Ackroyd / Armadillo by William Boyd / And The Ass Saw the Angel by Nick Cave / What a Carve Up by Jonathan Coe / Americana by Don DeLillo / Then We Came to the End by Joshua Ferris / The Reluctant Fundamentalistby Mohsin Hamid / The Believers by Zoe Heller /How to Be Good by Nick Hornby / Lights out for the Territory by Iain Sinclair

Just Mercy A Story of Justice and Redemption