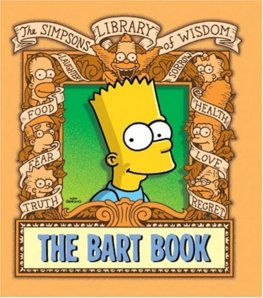 The Bart Book is now being released in hardback, as part of the ongoing series: The Simpsons Library of Wisdom. Bart Simpson, the much-maligned, misunderstood, under-appreciated 'underachiever', comes clean and (God help us ) it's worse than we thought. Now the truth can be told at last as Bart offers up his school survival guide, secret codes, pullable pranks, dream tattoos, favourite El Barto 'tags', and the Christmas list to end all lists (and future visits from Santa). It's the worst, we mean . the best book ever In The Simpsons Library of Wisdom, Matt Groening, the creator of 'The Simpsons', offers an ongoing series of portable and quotable books that will eliminate the need for all religions and philosophies, exalt man's role in the universe and make the world a better place ... sort of. No other television show in history has commented so freely and so humorously on modern times, and there seems to be no end in sight for the sharp satire and pointed parody that 'The Simpsons' serves up every night of the week all around the world.

How to Speak Emoji