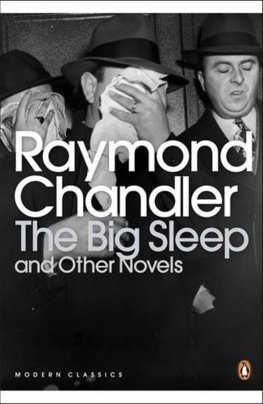 Big Sleep and Other Novels

Raymond Chandler was America's preeminent writer of detective fiction, and this Penguin Modern Classics edition of The Big Sleep and Other Novels collects three of the best novels to feature his hard-drinking, philosophising PI, Philip Marlowe.

Raymond Chandler created the fast talking, trouble seeking Californian private eye Philip Marlowe for his first great novel The Big Sleep in 1939. Often imitated but never bettered, it is in Marlowe's long shadow that every fictional detective must stand - and under the influence of Raymond Chandler's addictive prose that every crime author must write. Marlowe's entanglement with the Sternwood family - and an attendant cast of colourful underworld figures - is the background to a story reflecting all the tarnished glitter of the great American Dream. The hard-boiled detective's iconic image burns just as brightly in Farewell My Lovely, on the trail of a missing nightclub crooner. And the inimitable Marlowe is able to prove that trouble really is his business in Raymond Chandler's brilliant epitaph, The Long Goodbye.

Raymond Chandler (1888-1959) was born in Chicago. It was during the Depression era that he seriously turned his hand to writing and his first published story appeared in the pulp magazineBlack Mask in 1933, followed six years later by his first novel, The Big Sleep, adapted into Howard Hawks' classic 1946 film noir, starring Humphrey Bogart and Lauren Bacall.

If you liked The Big Sleep and Other Novels, you might enjoy Dashiell Hammett's The Thin Man, also available in Penguin Modern Classics.

'One of the greatest crime writers, who set standards that others still try to attain'
Sunday Times

'Raymond Chandler invented a new way of talking about America, and America has never looked the same to us since.'
Paul Auster, author of The New York Trilogy

'Chandler wrote like a slumming angel and invested the sun-blinded streets of Los Angelos with a romantic presence'
Ross Macdonald, author of The Drowning Pool

Lady in the Lake and Other Novels

Old Man and the Sea

The Game Of Chess And Other Stories