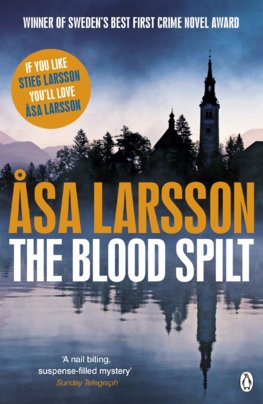 Before Stieg Larsson, there was Asa Larsson . . . the follow up to The Savage Altar, The Blood Spilt is a truly absorbing, atmospheric and fast-paced thriller featuring lawyer Rebecka Martinsson, a fantastic character in the mould of The Silence of the Lambs' Clarice Starling.

It is midsummer in Sweden - when the light lingers through dawn and the long winter comes to an end. Now, in this magical time, a brutal killer has chosen to strike, and the murder of a female priest sends shockwaves through the community.

It has been almost two years since attorney Rebecka Martinsson returned to her birthplace, Kiruna, in order to stop an eerily similar murder spree. Now she is back in Kiruna, where a determined policewoman works on the case and the people who loved or loathed the victim mourn or revel in her demise. As Rebecka is drawn into a mystery that soon will claim another victim, the dead woman's world consumes her: a world of hurt and healing, sin and sexuality, and above all, of lethal sacrifice.

The Meaning of Rice

Something to Tell You