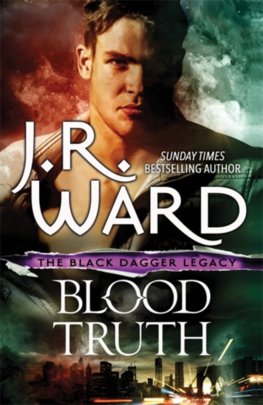 flat-out amazing' ALL ABOUT ROMANCEAction-packed, gritty, super-sexy and dark: the legacy of the Black Dagger Brotherhood continues. ____________________As a trainee in the Black Dagger Brotherhood's program, Boone has triumphed as a soldier and now fights side by side with the Brothers. Following his sire's unexpected death, he is taken off rotation against his protests-and he finds himself working with Butch O'Neal, former homicide cop, to catch a serial killer: Someone is targeting females of the species at a live action role play club.

When the Brotherhood is called in to help, Boone insists on being a part of the effort-and the last thing he expects is to meet an enticing, mysterious female...who changes his life forever. Ever since her sister was murdered at the club, Helaine has been committed to finding the killer, no matter the danger she faces. When she crosses paths with Boone, she doesn't know whether to trust him or not-and then she has no choice.

As she herself becomes a target, and someone close to the Brotherhood is identified as the prime suspect, the two must work to together to solve the mystery...before it's too late. Will a madman come between the lovers or will true love and goodness triumph over a very mortal evil?__________________________Everyone's raving about J R Ward"To die for."-New York Times bestselling author Suzanne Brockmann"A dynamite new vampire series-! J. R.

Ward has created a wonderful cast of characters, with a sexy, tormented, to-die-for hero...a fabulous treat for romance readers!"-New York Times bestselling author Nicole Jordan"It's not easy to find a new twist on the vampire myth, but Ward succeeds beautifully. This dark and compelling world is filled with enticing romance as well as perilous adventure. The Black Dagger Brotherhood series promises tons of thrills and chills."-RT Book Reviews"J.

R. Ward takes you deep into her intense, dark world of vampires and holds you captive until her last breathless word....Sure to satisfy lovers of vampire romance everywhere."-Affaire de Coeur"J. R.

Ward's urban fantasy romance series is so popular I don't think there's a reader today who hasn't at least heard of the Black Dagger Brotherhood."-USA Today"Hold on tight for an intriguing, adrenaline-pumping ride."-Booklist

The Readers of Broken Wheel Recommend

My Name is Nobody

Catastrophic History of You and Me