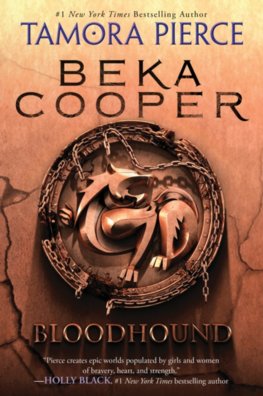 A #1 New York Timesbestseller from the fantasy author who is legend herself: TAMORA PIERCE. In this second book in the Beka Cooper Trilogy, Beka uses her unique magic and street smarts to solve a dangerous mystery!

Is Beka ready for her first real mission?

Beka Cooper is having trouble settling into the Provost's Guard. In just five months as a full member, she's already gone through four partners.

But now she's teamed up with the renowned Dog Goodwin and an even more famous doga scent hound named Achoo. Part of a team at last, Beka is sent on a special mission to Port Caynn. Once there, she delves deeper into the dark underworld of Tortall and learns that corruption extends beyond the Rogue's Court of criminals.

It would be risky to continue to investigate, but Beka's not one to give up the scent. Even if it means ending her career . .

The Beka Cooper Trilogy introduces an amazing young woman who is the ancestor of one of Tamora Pierce's most popular characters: George Cooper. Here, Pierce gives fans exactly what they wanta smart, savvy heroine making a name for herself on the mean streets of Tortall's Lower Citywhile offering plenty to appeal to new readers as well!

She is a pillar, an icon, and an inspiration. Cracking open one of her marvelous novels always feels like coming home."
SARAH J. MAAS, #1 New York Timesbestselling author

Her heroines cut a swath through the fantasy world with wit, strength, and savvy. Her stories still lead the vanguard today. Pierce is the real lioness, and we're all just running to keep pace."
LEIGH BARDUGO, #1 New York Timesbestselling author

Thanks for the Trouble

Any Way the Wind Blows

Because You Love to Hate Me