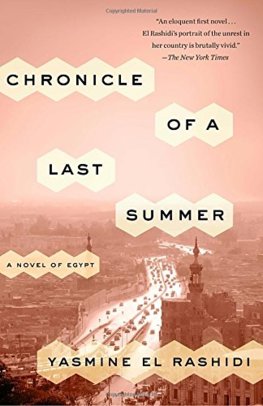 Chronicle of a Last Summer

A young Egyptian woman recounts her personal and political coming of age in this brilliant debut novel.

Cairo, 1984. A blisteringly hot summer. A young girl in a sprawling family house. Her days pass quietly: listening to a mother's phone conversations, looking at the Nile from a bedroom window, watching the three state-sanctioned TV stations with the volume off, daydreaming about other lives. Underlying this claustrophobic routine is mystery and loss. Relatives mutter darkly about the newly-appointed President Mubarak. Everyone talks with melancholy about the past. People disappear overnight. Her own father has left, too--why, or to where, no one will say.

We meet her across three decades, from youth to adulthood: As a six-year old absorbing the world around her, filled with questions she can't ask; as a college student and aspiring filmmaker pre-occupied with love, language, and the repression that surrounds her; and then later, in the turbulent aftermath of Mubarak's overthrow, as a writer exploring her own past. Reunited with her father, she wonders about the silences that have marked and shaped her life.

At once a mapping of a city in transformation and a story about the shifting realities and fates of a single Egyptian family, Yasmine El Rashidi's Chronicle of a Last Summer traces the fine line between survival and complicity, exploring the conscience of a generation raised in silence.