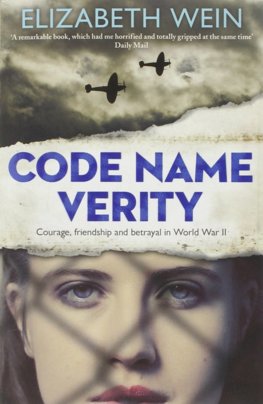 Two young women become unlikely best friends during World War II, until one is captured by the Gestapo.

“It does more than stick with me. It haunts me. I just can’t recommend it enough” Maggie Stiefvater, bestselling author of Shiver.

“I was bereft when I finished it” Jill Mansell.

“It’s about friendship and bravery, loyalty and love, and will most definitely leave you sobbing” The Bookseller.

Only in wartime could a stalwart lass from Manchester rub shoulders with a Scottish aristocrat. But then a vital mission goes wrong, and one of the friends has to bail out of a faulty plane over France. She is captured by the Gestapo and becomes a prisoner of war.

The story begins in “Verity”’s own words, as she writes her account for her captors. Truth or lies? Honour or betrayal? Everything they've ever believed in is put to the test . . .

A gripping thriller, Code Name Verity blends a work of fiction into 20th century history with spine-tingling results. A book for young adults like no other.

“This is a remarkable book” Daily Mail

The Queen of the Night

the mermaids voice returns in this one