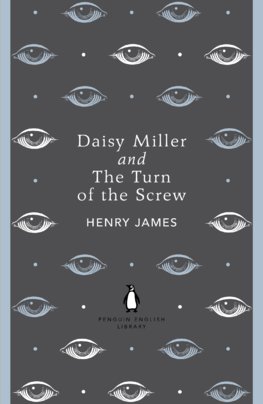 "I'm a fearful, frightful flirt! Did you ever hear of a nice girl that was not?"

Travelling in Europe with her family, Daisy Miller, an exquisitely beautiful young American woman, presents her fellow-countryman Winterbourne with a dilemma he cannot resolve. Is she deliberately flouting social convention in the outspoken way she talks and acts, or is she simply ignorant of those conventions? In Daisy Miller Henry James created his first great portrait of the enigmatic and dangerously independent American woman, a figure who would come to dominate his later masterpieces.

Oscar Wilde called James's chilling The Turn of the Screw 'a most wonderful, lurid poisonous little tale'. It tells of a young governess sent to a country house to take charge of two orphans, Miles and Flora. Unsettled by a sense of intense evil within the houses, she soon becomes obsessed with the belief that malevolent forces are stalking the children in her care.

The Portrait of a Lady

Penguin Readers Level 6: The Turn of the Screw

The Turn of the Screw and Other Stories