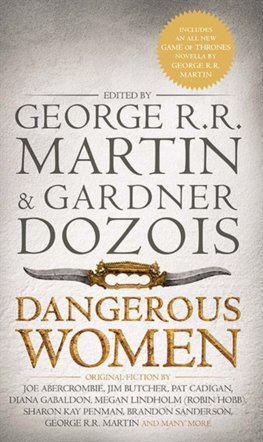 George R.R. Martin and Gardner Dozois have put together a towering anthology of specially-commissioned stories from the most stellar names in the genre, set in a number of readers' favourite fantasy worlds.

George R.R. Martin is the bestselling author of A Song of Ice and Fire, the inspiration for HBO’s hit series Game of Thrones.

The collection will also feature a new and unpublished 100pp novella by George R.R. Martin set in the world of A Song of Ice and Fire – now the award-winning HBO show, Game of Thrones.

The novella, entitled 'The Princess and the Queen', will reveal the origins of the Targaryen Civil War, otherwise known as 'The Dance of the Dragons', a war that split a then-fledgling Westeros in two, pitting Targaryen against Targaryen and dragon against dragon.

• “Some Desperado” by Joe Abercrombie – A Red Country story
• “Nora’s Song” by Cecelia Holland
• “Bombshells” by Jim Butcher – A Harry Dresden story
• “Wrestling Jesus” by Joe R. Lansdale
• “Neighbours” by Megan Lindholm (who also writes as Robin Hobb)
• “Shadows For Silence in the Forests of Hell” by Brandon Sanderson
• “A Queen in Exile” by Sharon Kay Penman
• “The Girl in the Mirror” by Lev Grossman – A Magicians story
• “Virgins” by Diana Gabaldon – An Outlander story

A Game of Thrones: The Illustrated Edition: A Song of Ice and Fire: Book One

A Reaper At The Gates

Beyond the Aquila Rift