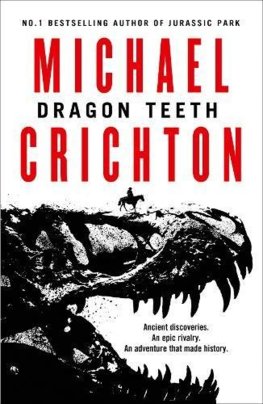 Michael Crichton, the #1 New York Times bestselling author of Jurassic Park, returns to the world of paleontology in this recently discovered novel ― a thrilling adventure set in the Wild West during the golden age of fossil hunting.

The year is 1876. Warring Indian tribes still populate America’s western territories even as lawless gold-rush towns begin to mark the landscape. Against this backdrop two paleontologists pillage the Wild West for dinosaur fossils, while deceiving and sabotaging each other in a rivalry that will come to be known as the Bone Wars.

Into this treacherous territory plunges William Johnson, a Yale student with more privilege than sense. Determined to win a bet against his arch-rival, William has joined world-renowned paleontologist Othniel Charles Marsh on his latest expedition. But Marsh becomes convinced that William is spying for his nemesis, Edwin Drinker Cope, and abandons him in Cheyenne, Wyoming, a locus of crime and vice.

Soon William joins forces with Cope and stumbles upon a discovery of historic proportions. The struggle to protect this extraordinary treasure, however, will test William’s newfound resilience and pit him against some of the West’s most dangerous and notorious characters…

All the Frequent Trouble of Our Days

Wizard and Glass, The Dark Tower 4

Walks in the Wild