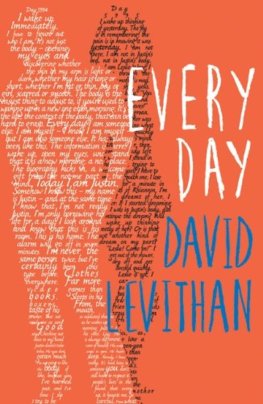 From the genius of David Levithan, co-author of Will Grayson, Will Grayson, and Nick and Nora's Infinite Playlist, comes a love story like no other you've read before.

Each morning, A wakes up in a different body. There’s never any warning about who it will be, but A is used to that. Never get too attached. Avoid being noticed. Do not interfere.

And that’s fine – until A wakes up in the body of Justin and meets Justin’s girlfriend, Rhiannon. From that moment, the rules by which A has been living no longer apply. Because finally A has found someone he wants to be with – every day . . .

A stunningly original novel that will make you view the world from a different perspective. You can also read Rhiannon's side of the story in Another Day.

Levithan’s powerful novel explores the complexities of first love in a unique way that will captivate anybody who loved Rainbow Rowell’s Eleanor & Park and Jandy Nelson’s I’ll Give You the Sun.

David is the New York Times best-selling author of Boy Meets Boy and Marly’s Ghost. While among his many collaborations are Will Grayson, Will Grayson with Fault in Our Stars author John Green. He is also a highly respected children’s book editor, whose list includes many luminaries of children’s literature, including Garth Nix, Libba Bray and Suzanne Collins. He lives and works in New York.

The Twelve Days of Dash and Lily

Take Me With You When You Go

Dash and Lilys Book of Dares

Take Me With You When You Go