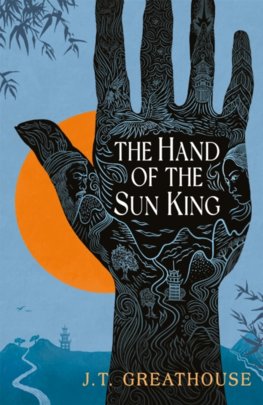 Hand of the Sun King

'An exciting new voice in epic fantasy' SFX'I cannot praise this book highly enough, it's just brilliant' Fantasy Book NerdAn epic fantasy where a boy's loyalty is tested with every step, and one wrong move could spell disaster for both himself and his peopleMy name is Wen Alder. My name is Foolish Cur. All my life, I have been torn between two legacies: my father's, whose family trace their roots back to the right hand of the Emperor.

My mother's, whose family want to bring the Empire to its knees. I can choose between them - between the safety of empire or the freedom of rebellion - or I can seek out a better path . .

. one filled with magic and secrets, unbound by suffocating legacy, but one which could shake my world to its very foundation. For my quest will bring me face to face with the gods themselves.

And they have been watching. Waiting to make their move . .

. The first book in the Pact and Pattern series. Fans of Robin Hobb, Brandon Sanderson's Mistborn and R.F.

Kuang's The Poppy War will love the magic running through every page. Readers can't get enough of The Hand of the Sun King:'Brilliantly told and immediately engrossing' Andrea Stewart, critically accalimed author of The Bone Shard Emperor'This is the closest I've ever come to finding something comparable to The Name of the Wind . .

. This could even be one of my favourite books of all time' The Chronicler'Seriously, this book has everything . .

. Greathouse's writing flows like silk, the world he has created practically leaps off the page . .

. it is a gripping combination of history and philosophy, remixed with some of my favourite fantasy elements including a complex magic system, a coming-of-age story, a morally conflicted protagonist, ancient mysterious gods and a massive world-spanning empire. An enchanting, intimate yet spacious world full of magic, intricate detail and richly imagined fantasy elements' Goodreads reviewer, 'The magic system is complex and fascinating .

Greathouse's prose is beautiful and poetic . . .

I savoured it and the lush descriptions painted the scenes vividly . . .

a beautiful and refreshing read. It has an intricate plot, political manoeuvring, and tragic events that Robin Hobb's fans would love' Goodreads reviewer, 'I felt fear and excitement and never being able to predict what was to come next aided in my helpless immersion into this story. I'm so eager to continue on with this already incredible series' Goodreads reviewer, 'Alder is a phenomenal main character to follow .

. . As close to a perfect debut as any fantasy fan could ask for' Goodreads reviewer,