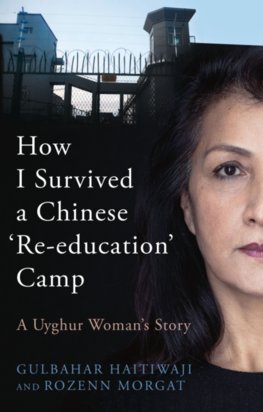 How I Survived A Chinese 'Re-education' Camp

"I have written what I lived. The atrocious reality." -Gulbahar Haitiwaji to Paris Match

For three years, she endured hundreds of hours of interrogation, torture, hunger, police violence, cold, and rats. Her name is Gulbahar Haitiwaji and she is the first Uyghur woman survivor of Chinese re-education camps to give a connected and detailed account of what happens there.

The camps are China's equivalent of the Gulag in Stalin's Russia. Since 2017, they have been 'home' to more than a million Uyghurs. The Uyghurs are a Turkish-speaking Muslim ethnic group in the western region of Xinjiang, which is coveted by the Chinese Communist Party because it is located on the 'new silk roads' - the flagship project of President Xi Jinping.

A bipartisan commission of the United States Congress says China's treatment of the Uyghurs is so appalling it may amount to 'genocide.' The Chinese Communist Party says the camps are part of 'the total fight against Islamic terrorism, infiltration and separatism.'

Gulbahar's testimony is chilling: she starkly recounts her experiences in the Chinese camp system and how she was saved thanks to the intervention of her daughter and the French foreign ministry. This rare account of life inside China's gulag is visceral and internationally important.

"In the camps, the re-education process is systematic in that it applies the same remorseless method to destroying all its victims. It starts out by stripping them of their individuality. It takes away your name, your clothes, your hair. There is nothing now to distinguish you from anyone else. Then the process takes over your body by subjecting it to a hellish routine: being forced by teachers to unendingly recite the glories of the Communist Party for eleven hours a day in a windowless classroom. Falter, and you are punished. So you keep on saying them same things over and over again until you can't feel, can't think anymore. You lose all sense of time: first the hours, then the days."

Chemistry and Other Stories