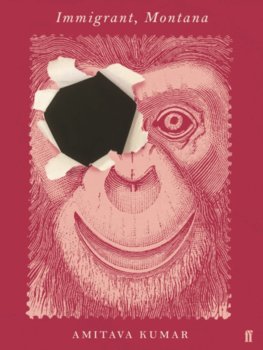 One winter morning, a monkey stole into Mamaji's room. He climbed on the huge white bed and finding Mamaji's pistol brandished it - they say - at my cousin, born two months after me and still in her crib. No one moved.

Then, turning the pistol around, the primate brain prompting the opposable thumb to grasp the trigger, the monkey blew his brains out. Meet Kailash. AKA Kalashnikov.

Or AK-47. Or just plain AK. His journey from India has taken him to graduate school in New York where he keeps falling in love: not only with women - Jennifer, Nina, Cai Yan - but with literature and radical politics, the fuel of youthful exuberance.

Each heady affair brings new learning: about himself, about America, and his relationship to a country founded on immigration, but a country that is now unsure of the migrant's place in the nation's fabric. How do you educate yourself in belonging when you are in a constant state of exile?Immigrant, Montana is the story of AK's sentimental education. His intellectual, emotional, and romantic journey gives the book a new narrative form, one that thrillingly reinvents the campus and postcolonial novel through wry, comic intelligence.

Good Man is Hard to Find