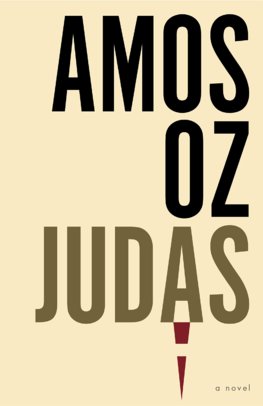 Shmuel, a young, idealistic student, is drawn to a mysterious handwritten note on a campus noticeboard. This takes him to a strange house, where an elderly invalid man requires a paid companion, to argue with and read to him. But there is someone else in the house, too… A woman, who is trailed by ghosts from her past. Shmuel is captivated by her, a sexual obsession which evolves into gentle love and devotion; and he is pulled to the old man, an intellectual obsession which also evolves into gentle love and devotion. Shmuel begins to uncover the house’s tangled history and, in doing so, reaches an understanding that harks back not only to the beginning of the Jewish-Arab conflict, but also the beginning of Jerusalem itself – to Christianity, to Judaism, to Judas.

Set in the still-divided Jerusalem of 1959–60, Judas is an exquisite love story and coming-of-age tale, and a radical rethinking of the concept of treason. It is a novel steeped in desire and curiosity from one of Israel's greatest living writers.

Suddenly In the Depths of the Forest