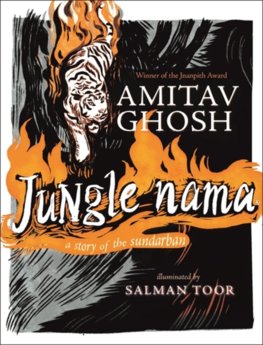 'One of the finest writers of his generation' Financial TimesThousands of islands rise from the rivers' rich silts,crowned with forests of mangrove, rising on stilts. This is the Sundarban, where great rivers give birth;to a vast jungle that joins Ocean and Earth. Jungle Nama is a beautifully illustrated verse adaptation of a legend from the Sundarbans, the world's largest mangrove forest.

It tells the story of the avaricious rich merchant Dhona, the poor lad Dukhey, and his mother; it is also the story of Dokkhin Rai, a mighty spirit who appears to humans as a tiger, of Bon Bibi, the benign goddess of the forest, and her warrior brother Shah Jongoli. Jungle Nama is the story of an ancient legend with urgent relevance to today's climate crisis. Its themes of limiting greed, and of preserving the balance between the needs of humans and nature have never been more timely.

Suddenly In the Depths of the Forest

The House of Gucci