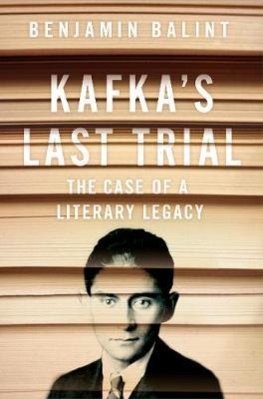 Benjamin Balint
The Case of a Literary Legacy
12,95 €
Na objednávku

'Fascinating and forensically scrupulous.' John Banville, GuardianWhen Franz Kafka died in 1924, his loyal champion Max Brod could not bring himself to fulfil his friend's last instruction: to burn his remaining manuscripts. Instead, Brod devoted the rest of his life to editing, publishing and canonizing Kafka's work. By betraying his friend's last wish, Brod twice rescued his legacy - first from physical destruction, and then from obscurity.

But that betrayal was also eventually to lead to an international legal battle: as a writer in German, should Kafka's papers come to rest in Germany, where his three sisters died as victims of the Holocaust? Or, as a Jewish writer, should his work be considered as a cultural inheritance of Israel, a state that did not exist at the time of his death?Alongside an acutely observed portrait of Kafka, Benjamin Balint also traces the journey of the manuscripts Brod had rescued when he fled from Prague to Palestine in 1939 and offers a gripping account of the Israeli court case that determined their fate. He tells of a wrenching escape from the Nazi invaders of Czechoslovakia; of a love affair between exiles stranded in Tel Aviv; and of two countries whose national obsessions with the past eventually faced off in the courts. For fans of Philippe Sands' East West Street, in Kafka's Last Trial Benjamin Balint invites us to consider Kafka's remarkable legacy and to question whether that legacy belongs by right to the country of his language, that of his birth, or that of his cultural affinities - but also whether any nation state can lay claim to ownership of a writer's work at all.

Kafkas Last Trial: The Strange Case of a Literary Legacy

The Mistletoe Bride and Other Haunting Tales

What is The What