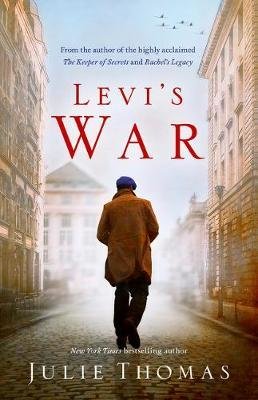 A story of courage and bravery from a Jew behind enemy lines during the Second World War. How many secrets can one family hold? Levi Horowitz isn't a natural-born soldier. But in November 1938, Berlin is a volatile place for a Jew, and the talented young musician secures passage to Switzerland.

Instead, Levi is taken to a Danish border checkpoint and from then on his war becomes secret, even from those he loves best. In 2017, a recording emerges, showing Levi in 1945 and revealing a story in equal parts shocking and heroic. It is a journey that leads him face-to-face with Hitler, and into a position to change the final outcome of the war.

Levi's War follows on from the enthralling historical novels The Keeper of Secrets and Rachel's Legacy, this time tracing the story of the eldest Horowitz son. Whether you're discovering Julie Thomas's books for the first time, or making a return visit to the saga of the Horowitz family, Levi's War will leave you utterly breathless. Praise for The Keeper of Secrets 'Thomas's writing comes alive when describing the glories of music and the alchemy of its extraordinary practitioners.

She has also managed to portray the horror of life in Dachau with pinpoint accuracy and emotional conviction.'NZ Listener'Originally self-published as an ebook, gaining widespread popularity and rave reviews, The Keeper of Secrets is the culmination of years of meticulous research, for which the reader reaps the rewards. Prepare to be swept up in a captivating story that both entertains and informs.'Australian Women's Weekly'I can see why it's been so successful. The Keeper of Secrets is holocaust fiction with a difference, a compelling tale about a precious violin and the people who love, play and covet it.'Herald on Sunday

The Keeper Of Secret

Interview with the Vampire