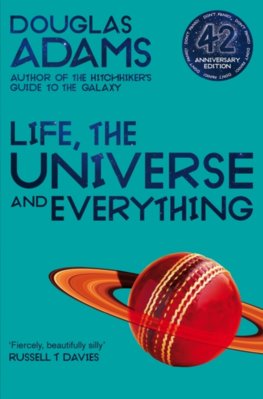 Life, the Universe and Everything

In Life, the Universe and Everything, the third title in Douglas Adams' blockbusting sci-fi comedy series, The Hitchhiker's Guide to the Galaxy, Arthur Dent finds himself enlisted to prevent a galactic war. This edition includes exclusive bonus material from the Douglas Adams archives, and an introduction by Simon Brett, producer of the original radio broadcast. Following a number of stunning catastrophes, which have involved him being alternately blown up and insulted in ever stranger regions of the Galaxy, Arthur Dent is surprised to find himself living in a cave on prehistoric Earth.

However, just as he thinks that things cannot get possibly worse, they suddenly do. An eddy in the space-time continuum lands him, Ford Prefect, and their flying sofa in the middle of the cricket ground at Lord's, just two days before the world is due to be destroyed by the Vogons. Escaping the end of the world for a second time, Arthur, Ford, and their old friend Slartibartfast embark (reluctantly) on a mission to save the whole galaxy from fanatical robots.

Follow Arthur Dent's galactic (mis)adventures in the rest of the trilogy with five parts: So Long, and Thanks for All the Fish, and Mostly Harmless.

The Ultimate Hitchhikers Guide to the Galaxy: The Complete Trilogy in Five Parts

The Ocean at the End of the Lane: Illustrated Edition