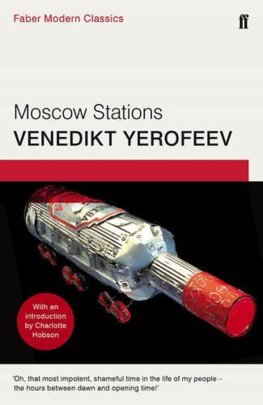 Venya is more interested in how much he and his colleagues can drink during the working day than in his job. Once he is fired, he spends the last of his money on booze and sets off on a train journey to visit beautiful, picturesque, utopian Petushki, where his beloved and child are waiting for him. But Venya's drinking gets out of control on the train, and Petushki seems to lie increasingly beyond his grasp.

Funny and sad, Yerofeev's alcohol-soaked story of a man on a train perfectly captures Soviet society on the brink of doom: exhausted, corrupt and heading into the night in sodden dignity.

'A dark and hilarious work cocktailing the satire of Gogol with the gutter-level eye of Bukowski and the menace and nightmare vision of Genet.' Time Out

Moscow Stations -- the only novel published by the Russian writer Venedikt Yerofeev -- was written in 1969 and existed first only amongst samizdat circles, as a typed manuscript passed hand to hand by readers in Soviet Russia. It was first published officially in the magazine Sobriety and Culture in 1989. This translation was first published by Faber in 1997.