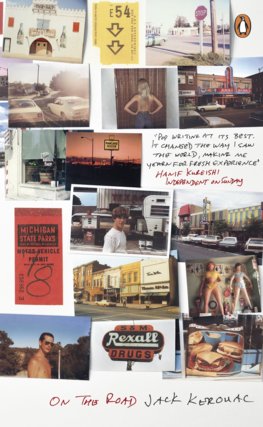 On The Road Original Scroll

On the Road by Jack Kerouac is the exhilarating novel that defined the Beat Generation and is a 2012 major motion picture starring Kristen Stewart, Kirsten Dunst and Sam Riley, beautifully repackaged as part of the Penguin Essentials range.

Sal Paradise, young and innocent, joins the slightly crazed Dean Moriarty on a breathless, exuberant ride back and forth across the United States. Their hedonistic search for release or fulfilment through drink, sex, drugs and jazz becomes an exploration of personal freedom, a test of the limits of the American Dream.

A brilliant blend of fiction and autobiography, Jack Kerouac's exhilarating novel defined the new 'Beat' generation and became the bible of the counter culture.

'On the Road sold a trillion Levis and a million espresso machines, and also sent countless kids on the road. The alienation, the restlessness, the dissatisfaction were already there waiting when Kerouac pointed out the road' William Burroughs

'Pop writing at its best. It changed the way I saw the world, making me yearn for fresh experience' Hanif Kureishi, Independent on Sunday

Jack Kerouac was born in Lowell, Massachusetts, in 1922. Educated by Jesuit brothers in Lowell, he decided to become a writer at age seventeen and developed his own writing style, which he called 'spontaneous prose'. He used this technique to record the life of the American 'traveler' and the experiences of the Beat Generation, most memorably in On the Road and also in The Subterraneans and The Dharma Bums. His other works include Big Sur, Desolation Angels, Lonesome Traveler, Visions of Gerard, Tristessa, and a book of poetry called Mexico City Blues. Jack Kerouac died in 1969.