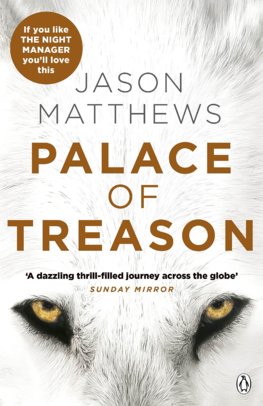 With the brilliant Palace of Treason, CIA veteran Jason Matthews confirms his position as the most exciting spy writer alive. This is as good as it gets.

PARIS
A young woman is cornered on a deserted boulevard.
Moments later she walks away, leaving her assailant for dead.

ATHENS
An elderly man walks into the American embassy with a story to tell.

MOSCOW
The most unlikely of traitors is uncovered by the most dangerous of men.

WASHINGTON
A brilliant, unorthodox CIA agent must single-handedly connect the dots to stop an intricate house of cards from toppling in a cold war that's taken a terrifying new twist.

'The greatest ever female character in spy fiction'
Sunday Times

'A dazzling thrill-filled journey across the globe'
Sunday Mirror

'Sublime and sophisticated . . . a fast-paced thriller as noteworthy for its superior style as for its gripping depiction of a secretive world'
Washington Post

'Matthews is the insider's insider. He knows the secrets. And he is also a master storyteller'
Vince Flynn

'Thrilling, absorbing and brilliantly descriptive . . . you won't fail to be won over'
Sunday Mirror

Through a Glass Darkly