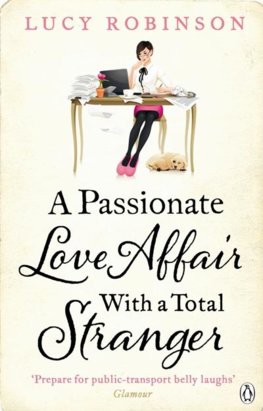 A Passionate Love Affair with a Total Stranger by Lucy Robinson, author of The Greatest Love Story of All Time, is a hilariously funny and gorgeously romantic story about falling in love when you least expect it.

Charley Lambert has worked hard at creating a perfect life. She has an aspirational flat, a job of international significance and a very good pair of legs, thanks to a rigorous health and fitness regime. Best of all, her boss has asked her out after seven years' hard flirting and a covert fumble in a mop cupboard.

Then she breaks her leg in three places, watches her boss propose to someone else and - horror - is forced to hand over her job to her nasty deputy. Charley, a certified workaholic, fears that she will go mad.

Dangerously bored, she starts helping people who are talentless at internet dating. Then William arrives in her inbox and rocks her world. Helpless, she watches herself fall in love with him and discovers she's not who she thought she was.

But can she turn her back on her old life - all for a total stranger?

'Charmingly fun with bags of romance and laughs' Closer

Lucy Robinson is the author of The Greatest Love Story of All Time. Prior to writing Lucy earned her crust in West End theatre production and then factual television, working on documentaries for the BBC, ITV, Channel 4 and Channel Five. Her writing career began when she started a dating blog for marieclaire.co.uk where she entertained readers with frank tales from her laughably unsuccessful foray into the world of internet dating.

Lucy was brought up in Gloucestershire and now lives with her boyfriend in South London. She is writing her next novel while working on various television projects and plotting a return to academia.

Greatest Love Story of All Time

Unfinished Symphony of You and Me